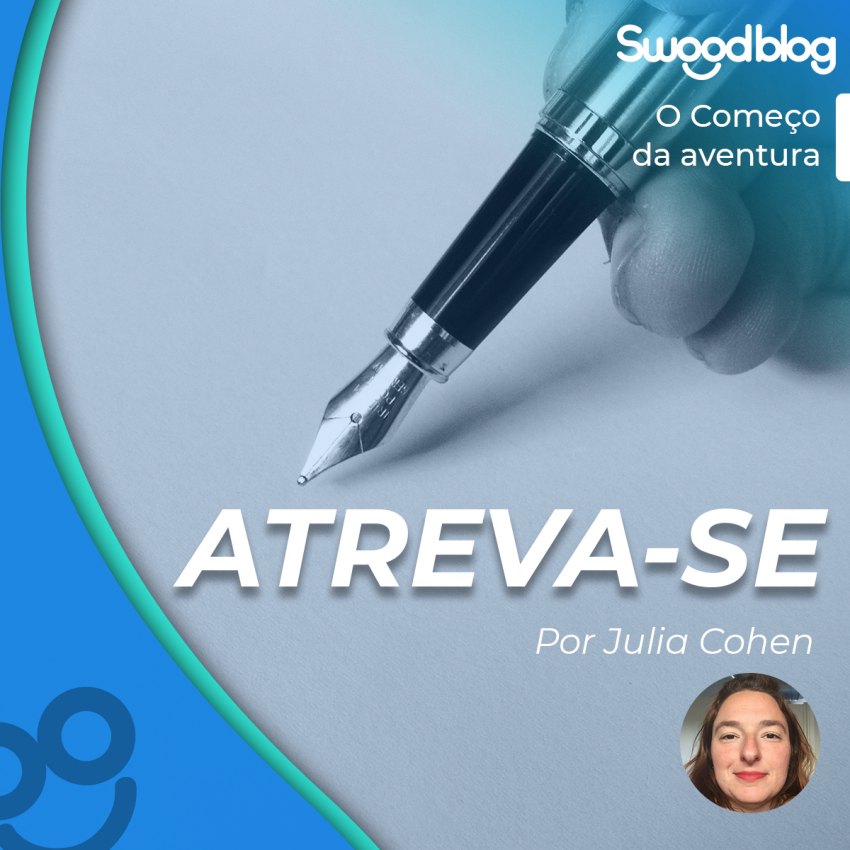 Hi, my name is Julia Cohen and I’m co-founder and CEO of Swood. In this column I will always try to bring you a more personal look, of someone who is undertaking and living the rollercoaster of emotions that doing so is. If being an entrepreneur wasn’t challenging enough, I’m still a woman, an immigrant, at the head of a fintech company in Europe. That is, the challenges are not few. However, you can’t deny that it has been a hell of an adventure! Therefore, the goal is that you literally share this journey with me. I intend to share mistakes, teachings, sorrows, joys and defeats. Because one thing is certain, no two days are the same when you are an entrepreneur.

This is the first text and I thought several times how I should begin. What should be the first story or experience to share with you? Well, maybe the ideal would be to start by saying: I have already failed. Yes, that’s right. Swood is not my first startup and as they say here in Portugal, with Arttu I committed a beautiful failure. But that brings me to another point: how I decided to become an entrepreneur. So let’s go from the beginning.

In 2016, me and Bruno (aka my husband) decided to move to Portugal and start a new life. We came with suitcase, gourd (not really) and dog (that’s right!). The truth is Bruno always wanted to have his own business, but for me it had never been an option. It turns out that in 2017 we decided to get a tattoo (I know, it sounds like useless information, but I’ll get there). We never imagined we would be so poorly attended. Seriously! I already had several tattoos by this time and I was used to a certain treatment and service. Thus, when we had this bad experience we started thinking how much better it would be to have everything solved through a website or platform and just go to the studio to do the tattoo. And that was it! So the idea of our first enterprise was born.

Bruno started researching the market and trying to convince me to get involved. He gave me several arguments about how cool it would be to have a business together, how it made sense the problem we wanted to solve. Fun fact: Bruno still didn’t have any tattoos. Anyway, after a lot of talking he convinced me to give it a try. At this time, I was still in my degree here, so it already started with a lot of trouble. But the reality is that we didn’t even know where to start. We enrolled in some courses and idea contests. We won two competitions organised by the University of Aveiro and slowly worked out what we should do.

But there was an important detail missing here, right? My background and Bruno’s is communication and business. That is, zero technology. OK, Bruno did study this part for a few years, but it had been a long time ago and he couldn’t write the code for our solution. Writing this now, I see how naive we were and how we had no idea what we were getting into. Anyway, it had to be exactly like that. If there’s one thing I’m sure of, it’s that we wouldn’t be where we are today if we hadn’t gone through that first experience.

Arttu had MVP (minimum viable product) and we even made a few sales. But we made a lot of mistakes. A lot. As is part of every entrepreneur’s first experience. So, in the middle of 2019, Bruno (always him!) had another idea. He started researching, validating it on his own, until he reached me and proposed that we start thinking of another path for Arttu. We analysed the situation for a few months and realised how much more potential the new idea had and even was more our face. We accepted our failure and decided it was time to start again.

Was it easy? Cross my heart, no! It was a well thought out decision that I am very proud of, but it was hard to accept the change. I know that to admit our failure is often complicated. But trust me, there is nothing better than being able to analyse yourself, make a conscious decision and open your arms to accept the consequences. So dare to fail, to recognise your mistakes and to start again!

Thank you for getting this far and I hope you’ve enjoyed what I’ve shared so far. There’s more coming soon! 😊